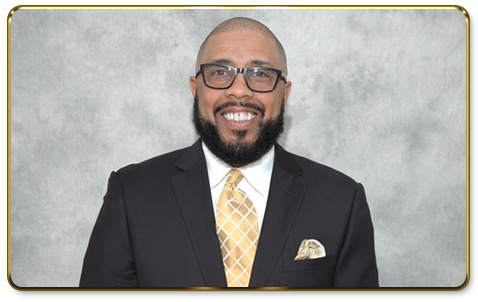 While pastoring Ebenezer Baptist Church, Pastor McClendon distinguished himself as a noted leader in both religious and civic affairs. He was chairperson of “Visions 2000”, a grass roots organization dedicated to holistically empowering the African American Community by the year 2000. He served on the African-American Community Roundtable, a group of citizens who met with law enforcement and local government in an effort to address concerns of the African-American community. He was also co-chair of an organization composed of clergy who addressed issues pertaining to labor and management in the city of Decatur.

Because of Pastor McClendon’s devotion to the religious and political arenas, he received the Outstanding Religious Leader of the Year Award presented by the local Jaycees in 1993. He was the youngest person ever chosen to receive this award.

Pastor McClendon received numerous other awards and honors, including being listed in Who’s Who Among College Students; Who’s Who Among Young Americans; a special award presented to a group of African-American men who rewrote the City of Decatur’s Human Rights Ordinance. The city accepted this revised ordinance and reinstated the Human Relations Official position.

In addition to these religious and political involvements, Pastor McClendon served as an instructor at several Bible Institutes and Colleges where he taught a variety of subjects from Homiletics to Philosophy. He also served as Director of the Youth Department and Director of the Ministers Seminary for Woodriver Baptist District Association

Pastor McClendon brings an extensive and impressive array of efforts and accomplishments in the field of ministry and is equipped with a proclamation and a program to empower this generation to carry out the timeless mandate given to the church by our Savior.

On October 30, 1994, the Mt. Zion Baptist Church family, under the providence of God and the leadership of the Holy Spirit, chose unanimously to extend the call of pastorate to Pastor McClendon. He assumed his responsibilities on the last Sunday of November in 1994. The Spirit of God has not ceased to bless this union with his abundance.

In 2006, Pastor McClendon led the newly renamed Mt. Zion All Nations Bible Church into a multi-million dollar worship & ministry facility.  The Lord continues to bless Pastor McClendon as he preaches the message of the kingdom of God.

In September of 2016, Pastor and (Lady) Mya McClendon were joined in Holy Matrimony.

A noted Preacher-Scholar, Pastor H. Levi McClendon is committed to teaching 21st Century Leaders to be accountable, action oriented, proclaimers of the Gospel of Jesus Christ. Presently, Pastor McClendon is engaged in overseeing the following initiatives.

A venue for training Pastors’ to hear and deliver the life-transforming word of God, via conference calls and meetings.

Teaching and training disciples, deacons, MIT (Ministers in training), and church leaders to accurately “go into the world” with the Good News of Jesus.

Teaching and encouraging both disciples and seekers in the knowledge of Jesus Christ. Weekly, he post a 10 minute segment called, “The Truth That Transforms.” Additionally, there is a weekly devotional segment entitled, “Ten Minutes To Live By…”.

Provides opportunities for community service through the following Vehicles:

Would you like to book Pastor McClendon at your upcoming event?

Fill out my online form.